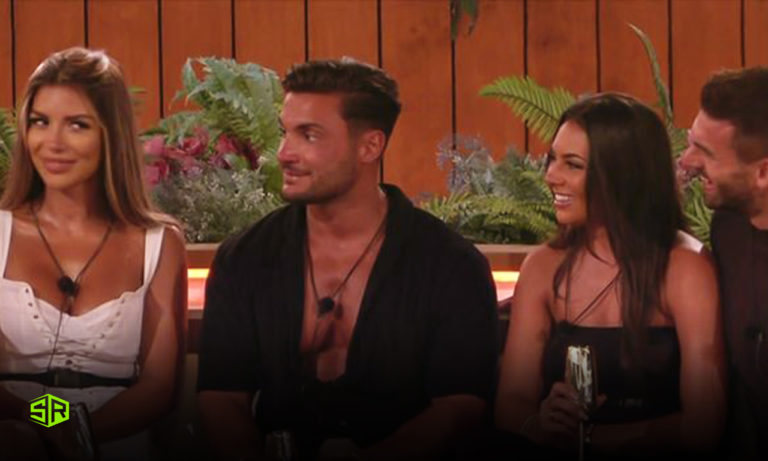 Love Island Season 8 fans have been in a conundrum as of late. Apparently, a key couple was nowhere to be seen in the show’s latest episode.

The ITV2 reality dating show will end soon, with just a few episodes left to its name. As the finale nears, the show’s excitement is constantly surging. The fans were befuddled after the last night’s episode, as a significant couple, Tasha and Andrew barely appeared onscreen throughout the episode.

The said couple was involved in some huge drama in recent episodes, including a dramatic fallout from Casa Amor. They didn’t even show up in the group scenes too much.

Taking to Twitter, many Love Island fanatics expressed their puzzlement over Tasha Ghouri and Andrew Le Page’s lack of appearance in the most recent episode.

Regarding the case of a certain couple missing from Love Island’s last night’s episode, @LoveIslandGB expressed how the episode was so interesting they forgot Andrew and Tasha failed to appear and questioned their existence:


Were Tasha and Andrew even in tonight's episode? Just remembered they exist 🤭🤭 #loveisland

Another user’s (@annniepw) opinion about the show was different. She thought the episode was boring without the key couple’s drama to look forward to and wanted to see more of them, for they missed them:

Where are Tasha and Andrew this episode it’s so boring that I miss them #loveisland pic.twitter.com/akI08HlFcM

@RhysFields was quick to point out why people wanted Andrew and Tasha to win in the first place and how they could forgive him so easily after what he did to Carol’s daughter. Her tweet blew up and got a response of over 45k likes and 3k retweets.

In case you didn’t know, a woman claimed that her daughter’s handbag was stolen by a guy who looked like Andrew at Bristol Sainsbury on March 12th.

don’t know why everyone has forgiven andrew so quickly and want him and tasha to win. Are we forgetting what he did to carol. pic.twitter.com/mWkuQYEvhN

On the other hand, @trollyfella believes Luca and Jacques have more chemistry together compared to Andrew and Tasha. The user shared a picture of Jacques hugging Luca before departing for good from the show.

These two have better chemistry than Tasha and Andrew…..#loveisland pic.twitter.com/UVro6HtQzC

Jacques left the show in order to focus on his mental well-being. After his exit, he revealed that becoming a part of Love Island Season 8 was the “worst decision of my life.”

In this season 8 of Love Island, the male contestants have been heavily criticized by the public due to their brash and toxic behavior with their female partners. Recently, Women’s Aid revealed how they were in talks with the show personnel to rectify the misogynistic behavior of the boys and to be careful in future shows as well.

Similarly, @urheartispure shared a screenshot of her complaint to Ofcom regarding Luca Bish’s “absolutely unhealthy and toxic behavior” towards the 19-year-old contestant, Gemma Owens. She also insisted her fellow Love Island fans to do the same.

submitted ofcom complaint regarding luca bish's absolutely unhealthy and toxic behaviour towards, gemma owen who is 19, and i implore you all to do this as well, just glad she appears strong enough to handle herself and stand her ground, wish i was like that at 19 #LoveIsland pic.twitter.com/HoNHn5G8HL

@Lola52007870 called her generation “tapped” because of the hypocrisy shown by people compared to how they reacted to Ekin-su and Davide’s spat and Gemma and Luca confessing their love for one another. Her tweet received over 7.5k likes:

our generation is tapped, ekin and davide rip each other’s throats out and we go “🥰🥹” but then gemma and luca confess their love and we all collectively vom #loveisland pic.twitter.com/mxVBkcyC2B

@n9ll22 called out Paige and Adam for being “the fakest couple” on this season’s Love Island, claiming the pair is boring and looks forced:

The fakest couple on this year's Love Island are Paige and Adam. It looks so forced and boring.#LoveIsland pic.twitter.com/GQovsn2kIE

Murad Merali (@MuradMerali) believed that the current batch of contestants were the ideal candidates for the “Lie Detector Test” and that it was too bad they eliminated the segment from the show. His tweet received nearly 6k likes:

The lie detector test would be so good for these couples in this season. This is probably the best contestants for it. A shame they removed it. #loveisland

Many fans praised Ekin-su and were determined that she’ll be the one to win this season:

@gigildnx shared how she firmly believes Ekin-su’s public’s favorite contestant. She even demanded they bring the “Tweet Challenge” to prove her claim:

Can’t wait for the islanders to eat their words when they find out that she’s the publics favourite. Bring the tweet challenge in now. The girls and boys in there can do one. It’s Ekin island #loveisland pic.twitter.com/L93JAtBA8Q

I can’t lie I see Ekin Su hosting love island. I never see a contestant taking over this show but I see it for her. She is love island. #loveisland

On the other hand, @DabasTanu said she has no worries for Ekin-su anymore as she’s already making it big on her own now:

I ain’t even worried for Ekin su anymore. She doesn’t even need to win this show. She is making it big nonetheless. #LoveIsland pic.twitter.com/vgKyueDcF1

Love Island: When does the show end? Finale date revealed

Love Island Season 8 will be wrapping on Monday, 1st August.

In Thursday’s episode (21st July), Ian Stirling, the narrator for the show, revealed the finale episode and shared it’ll air from 9pm to 10:30pm.

If the series continues to follow the format of previous seasons, the final four couples will get to meet their families, and the winner will be crowned. The winning duo can decide to either share the £50,000 prize or steal it.

The last season of Love Island was won by Millie Court and Liam Reardon, who shared their prize. Just last week they revealed they split up a year later after the 2021 finale aired.