Just within 40+ days of its release, Queen’s Gambit has started making headlines for numerous things.

This historical drama series premiered on Netflix on 23 October 2020, and to date, more than 62 million people have watched this show. Netflix tweeted that It has become “Netflix’s biggest scripted limited series to date”:

Not just that, the search for “Chess Sets” are soaring high up to 250% on eBay. Another interesting thing to look into is the impact that Queen’s Gambit has had on the masses. Google’s search queries for “how to play chess” has also hit an all-time high in 9 years.

Here is another crazy fact for you, the original Novel Queen’s Gambit, has now become a “New York Times bestseller” after 37 years of its release. The novel was released in 1983, but it has received its due popularity after the series based on its story premiered on Netflix. 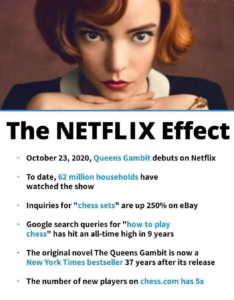 As reported by Business Insider, online websites such as Chess.com have also noticed a surge in new memberships as high as 5 times more than the average. They have also introduced Beth Harmon bots, allowing users to play against the Queen herself.

We do not know if it’s the show that is so enticing or because of the pandemic situation that the show got this much visibility, but one thing we all know is that it really has influenced many people around the globe. Maybe that is what you call the Netflix effect!

A Guide: Best VPN for Netflix