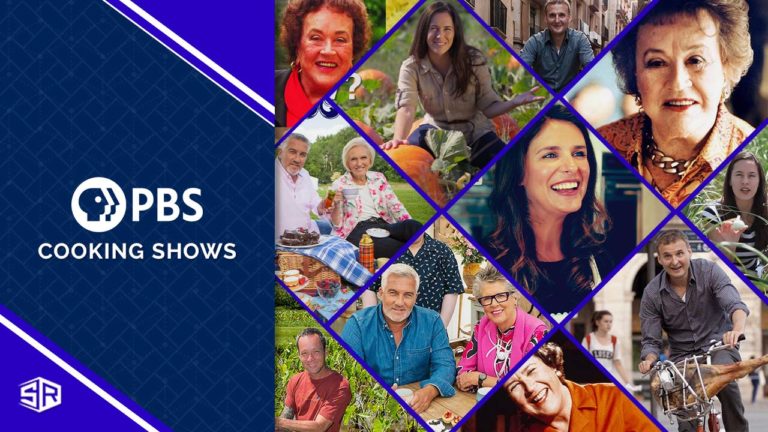 Are you a fan of cooking shows and enjoy watching them and learning new recipes?

Well, we have listed the 20 Best PBS Cooking Shows that help you decide what’s going to be in your dinners and help you learn new recipes for this weekend.

PBS is a streaming platform that consists of a variety of content like movies, series and various cooking shows also. This platform can only be accessed in the US thus a premium VPN is needed to watch PBS outside USA.

So, without any further delays, let’s jump into the list of the 20 best PBS Cooking shows to stream right now.

A small group of test cooks is shot in a real, working test kitchen for the show.

The show is produced by America’s Test Kitchen, the producers of Cook’s Illustrated and Cook’s Country magazines, and it began airing in Season 19 at ATK’s test kitchen facility in Boston’s Innovation and Design Building.

In addition to cookbooks, podcasts, and websites linked with each show and magazine, America’s Test Kitchen brand provides cookbooks that provide recipes, equipment and ingredient reviews, and recommendations.

Julia Child created and presented The French Chef, an American television culinary show that aired on WGBH, a public television station in Boston, Massachusetts, from February 2, 1963, to January 14, 1973.

It was one of the first cookery shows on television in the United States.

The French Chef was the first broadcast in 1962. The hugely successful show aired for a total of 206 episodes. It is credited with persuading the American public to try their hand at home cooking French cuisine.

The show was inspired by a special presentation Child delivered on WGBH based on her co-authored book Mastering the Art of French Cooking.

WGBH produced The French Chef for National Educational Television from 1963 through 1973. (and later for PBS).

A Chef’s Life is a half-hour character-driven documentary and cooking series that follows Chef Vivian Howard as she leaves the big city to start a fine dining restaurant in small-town Eastern North Carolina with her husband Ben Knight.

Each episode follows Vivian as she searches for the ingredients that inspire her seasonal recipes in cornfields, strawberry patches, and hog farms.

Vivian investigates Southern food, past and present, one ingredient at a time, with the current sensibilities of a chef.

The 13-week series combines the excitement and drama of a high-pressure business with the joys and difficulties of family life in a celebration of authentic farm-to-table food.

Food tastings, equipment testing, and advice and practices from the test kitchen, such as how to care for cookware and how to avoid common cooking blunders, are all typical topics on the show.

This cooking show helps you learn new recipes and is one of the best shows on the list of 20 Best PBS Cooking Shows.

In this series from American Public Television, people and places making a positive influence on the globe mix environmentally responsible outdoor living with traditional know-how.

A Seattle beekeeper sets up a home hive, producing flowers without chemicals, and a tour of a soil-testing lab are among the stories.

In this series hosted by chef Ed Kenney, the connections between Hawaiian families and their favorite family foods are uncovered. Chef Kenney meets with people on the islands and follows their food memories throughout the world in each episode.

He also demonstrates how cooking brings cultures, communities, and families together.

He visits Okinawa, Tahiti, California, Japan, Puerto Rico, and the Hawaiian Islands as a result of his stories.

If you love this show then also watch Taste the Nation with Padma Lakshmi on Hulu outside USA.

7. I’ll Have What Phil’s Having

Phil Rosenthal, the creator of “Everybody Loves Raymond,” travels the world in search of culinary delicacies and odd cuisine.

Each hour-long episode takes Rosenthal and the audience on different excursions, including trips to craftsmen, marketplaces, vineyards, and farms.

Rosenthal may seek to find individuals and places that are keeping traditions alive, as well as those who are establishing new ones, thanks to the unscripted series.

Allison Janney and Martin Short appear as guests throughout the series.

The search for Britain’s top amateur baker returns in the fourth series, with 12 enthusiastic baking lovers competing for the prize.

Presenters Mel Giedroyc and Sue Perkins are back, as are judges Mary Berry and Paul Hollywood, who construct the three challenges that the contenders face each week.

Berry and Hollywood examine, probe, and taste the baked goods before deciding who gets to eat their cake.

You can also watch this show on Channel 4 but a VPN is needed to watch Channel 4 in USA. Also, this is one of the best shows to watch on Netflix.

Isn’t it interesting how much kids enjoy being in the kitchen? The kitchen is a terrific location to explore, whether they’re ripping through the refrigerator, peeping into a pot, or sneaking a snack.

And that’s exactly what Kitchen Explorers is all about: making discoveries.

You’ll find simple and delicious recipes, as well as new methods to prepare old favorites, advice for making healthy foods tasty, and meals that are improved with the help of little hands.

Julia Child hosts a food show featuring the best pastry chefs, bakers, teachers, and cookbook authors in the country. Each expert comes to Julia’s kitchen to explain how to cook their signature dish, offering techniques, suggestions, and recipes.

You can learn a lot from this show. From easy to difficult recipes all are covered in this show.

This is one of the best shows from our 20 Best PBS Cooking Shows.

The chefs collaborate on four dishes: a turkey galantine with sausage and herbs, osso bucco (salmon encased in potato crust), and apple charlotte with two sauces.

The show is a must-watch. It let you learn all new recipes which can be your next favourite. The combination of various ingredients used to make these recipes will surely make your dish mind-blowing. Ready to see some incredible collabs of dishes? Stream the now from anywhere by using a VPN.

Choi is an engaging, passionate host on Broken Bread — an empathetic evangelist for food equity, a truth seeker, and a diner who sits down with his guests and eats with gusto and appreciation, whether it’s perilla leaf-wrapped dumplings at Shiku in L.A.’s Grand Central Market or caramelized pork with eggs at Vietnamese restaurant Bé in East Hollywood.

“Meals Ready to Eat” goes from coast to coast and beyond to explore the military-veteran community’s foodie culture and gourmet culinary traditions.

August Dannehl, a Navy veteran, takes viewers behind the scenes of military culinary operations, from gourmet meals created in military dining halls to a Marine veteran who uses his military skills to lead a first-class kitchen.

This show can help learn a lot of recipes. The combination of different ingredients enables you to invent some new dishes that will surely be loved by your friends and family.

“The Migrant Kitchen” is an Emmy nominated documentary series that looks at America’s burgeoning food scene through the eyes of a new generation of chefs whose cuisine is influenced by immigrant culture.

Visit the kitchens of those who have reshaped the country’s culinary scene by fusing traditional ethnic cuisines with modern flavors and methods.

Life & Thyme collaborated on the production of “The Migrant Kitchen. This is one of the 20 Best PBS Cooking Shows.

Milk Street Television, hosted by Christopher Kimball, searches the globe for techniques and ingredients that can revolutionize the way Americans cook and eat, such as a new way to use spices, a simpler way to cook chicken, a unique combination of ingredients, or a trick that transforms ordinary food into something extraordinary.

This show is one of the best on our list of 20 Best PBS Cooking Shows. You can learn a lot of new recipes with the twist of different ingredients from this show.

Guy Fieri, the second-season winner of “The Next Food Network Star,” expands his television portfolio with a new cooking show on the network.

This one, on the other hand, features Fieri cooking some of his favorite recipes in front of a live studio audience.

THE HOOK, from the makers of A Chef’s Life, goes behind the scenes at chef Ricky’s Durham restaurant, Saltbox Seafood Joint, to recognize the contributions of black chefs and fishermen to coastal food culture and highlight the seafood traditions of North Carolina’s coastline.

After so much time apart, television chef Jamie Oliver is back with a compilation of dishes meant to be shared with friends, family, and loved ones.

The episode is based on Jamie’s new book, ‘Together,’ which includes dishes intended expressly for autumn feasts that will bring people together, as well as culinary hints and guidance.

Chef Jamie Oliver is taking home-cooking to the next level at a time when the dining table is the new restaurant and we can spend more time with friends and family.

This four-part series is the definitive approach to bringing people together over tasty, doable cuisine. This is one of the 20 Best PBS Cooking Shows.

The award-winning chef will travel across Louisiana to learn about the state’s traditional culinary traditions.

If you love this show you can also watch Junior Bake Off. You will surely love it.

In every episode, Lidia’s passion for cooking shines through as she teaches viewers how to draw on their own roots to create a sense of home in the kitchen.

You can also watch this show on Amazon Prime. The best VPNs for Amazon Prime will help you unblock Prime Video in your region.

Tsai Ming, a celebrity chef and show host, breaks down Asian food into simple, easy-to-replicate recipes, allowing everyone to savor the rich flavors and unique scents without having to go to a restaurant.

In your own kitchen, prepare nutrient-dense and savory Asian cuisine.

Ming demonstrates his ability for combining similar ingredients to create a range of dishes that appear to be unrelated and then shares his methods with viewers so that they, too, can have an Asian feast.

With our list of 20 Best PBS Cooking Shows, you can surely learn some new recipes. The combination of different ingredients makes the dish the best.

The easy recipes shown by the chefs of these shows let you decide what to make for dinner.

So learn from these shows and feed your family the best.

If you can not access these shows in your region use the best VPN for streaming so that you can stream without facing geo-restrictions and buffering issues.