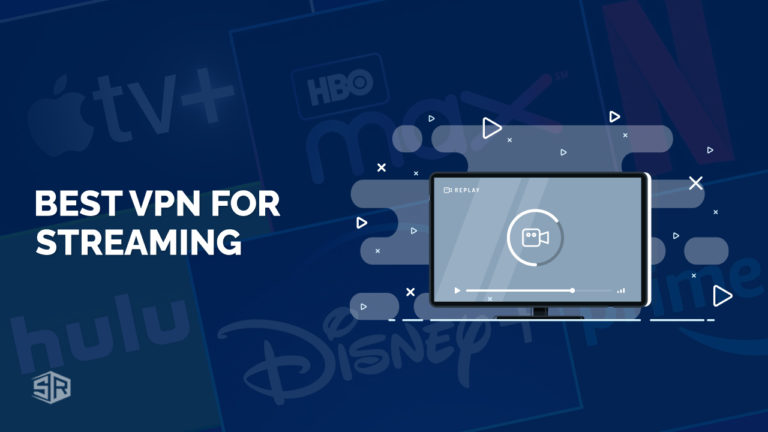 Finding out the best VPN for streaming is a difficult task as there are a lot of VPN providers competing with each other to be on top. The competition has given users a lot of choices to opt from.

More often than not, even if you do settle upon a VPN, you are likely to face at least one of the following problems:

We understand how aggravating that may be. As a result, we have gone through the rigorous VPN services testing procedure so that you do not have to. So, take a look at our list of the 5 best streaming VPNs before you invest in one.

How do I choose the Best VPN for Streaming?

The best VPN for streaming on the market combine lightning-fast connection speeds with impenetrable security. A fast and dependable connection is clearly beneficial for steady streaming with no dreaded buffering. A large number of servers is often a big help when it comes to getting a solid connection. Here are some features to consider when choosing the Best Streaming VPN.

After rigorous testing and comparisons, we have listed the 5 best VPN for Streaming that will allow you to watch your favorite movies and TV shows from this streaming service:

How to stream with a VPN?

There is no single solution that will work with any VPN provider you come across in the wild. Each VPN service is unique, and some may require additional measures to operate with streaming video. Some will require you to connect to specialized streaming servers, while others will operate right away.

If you want a quick sumary, here’s how to stream with a VPN.

A Detailed Look at the Best Streaming VPNs

Before we delve into a more elaborated description of the Best VPNs for streaming that offer the best performance for streaming geo-blocked websites such as Netflix, let’s get the most basic thing straight: They all have excellent unblocking abilities, no matter where in the world you are.

ExpressVPN tops our list of recommended VPNs due to numerous reasons, but especially because it is the fastest. In the speed tests we conducted, it managed to offer a download speed of 87.18 Mbps and an upload speed of 52.13 Mbps on a 100 Mbps connection. We have connected to a server in New York.

It has been in the business since 2009 and has an extensive network of VPN servers. This VPN has a network of 3000+ servers and also a total of 25+ US locations.

Here is the speed test result we conducted on ExpressVPN to check its speed for different streaming services.

ExpressVPN has a built-in useful Kill Switch feature, which avoids system statistics from dripping external VPN app tunnels if the VPN connection flops. It also offers some great security features like 256-bit encryption, DNS leak protection and also guarantees a no-log policy. This is the best VPN for streaming.

Its cheapest plan is just US$ 6.67/mo - Save 49% and get 3 extra months FREE with 12-month plan that comprises 12+3 free months and also offers a 30 day money-back guarantee as well. You can also read the guide Does ExpressVPN Work With Netflix?

Despite being a small network, Surfshark is giving the ultimate tough time to its competitor with excellent features like unlimited simultaneous connections through which you can support your entire office or home in just US$ 2.30/mo - 82% Off on 2 Years Plan. Surfshark is one of the best affordable streaming VPN app. This is the best VPN for streaming and affordable too.

It also provides you with features like ad-blocking, anti-tracker, and anti-malware tools and has 3,200 servers in 65 locations and 600+ US servers in 23+ locations.

The loss of speed was just 17% on average during the speed test we conducted, which pushes it ahead of many competitors.

It offers a download speed of 88.14 Mbps and an upload speed of 83.72 Mbps on a 100 Mbps connection. We have connected to a server in Atlanta.

This cheapest streaming VPN extension support for top browsers like Chrome and Firefox has ranked It up among its competitors as it is strongly recommended by the German Cyber Security Firm Cure 53.

Repeated buffering and sudden speed drops are the main symptoms of bandwidth throttling, which Internet Service Providers use to slow down their users’ internet connections. This Virtual private network has a solution for you as it provides bufferless streaming.

You can also use 5 Best VPNs to Watch Disney Plus From Anywhere to unblock any streaming service of your choice. Surfshark is also one of the best VPNs for HBO Max streaming.

NordVPN is one of the most popular VPN providers in the industry, owing to its vast number of servers. While most of its competitors offer 5 connections, it offers 06 with its servers. It is operating in 62 countries with more than 5300 servers on more than 80 server locations and 1970+ US servers in 15 locations.

When you connect to it, it automatically links you to the fastest server available in the location. This reliable service user can also reach them to provide a Private IP option to run the dedicated VPN service. Its Kill Switch feature turns the VPN into TOR in a single click. It is one of the best VPN for streaming tv such as YouTube TV outside USA, Peacock tv, Sling tv and many more. You can also read 5 Best VPNs To Watch HULU if you want to know about Hulu.

On a 100 Mbps connection speed, this VPN provided a  download speed of 85.48 Mbps, an upload speed of 48.42 Mbps. We have connected to one of the servers in New York.

NordVPN will cost you US$ 3.49/mo - Save 60% on 2 Years Deal and includes a full 30-day refund policy. We also have a detailed guide of Does NordVPN Work With Netflix? for you.

Stream Geo-Blocked Content Now!Plenty of Servers to Choose from

CyberGhost is a unique VPN for streaming. It has a huge network of 6400 servers in 90 countries that will allow you to change your local IP address so that you can access geo-restricted content in your region. It unblock streaming services like Netflix, Hulu, Amazon Prime and many more. 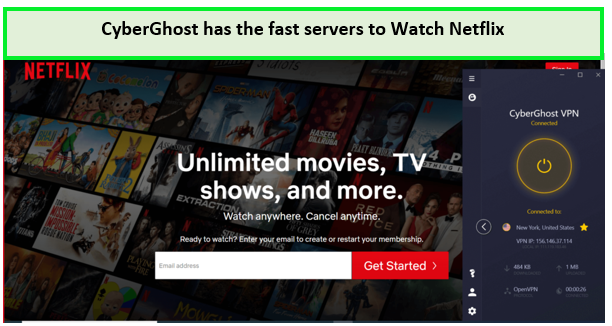 When tested on a US server, it managed to offer a download speed of 81.98 Mbps and an upload speed of 40.90 Mbps on a 100 Mbps connection. We have connected to a server in New York.

It has a strict no-logs policy and also offers a money-back guarantee.

5. IPVanish – VPN with some Surprising Features

IPVanish is a VPN service provider based in the United States that focuses on speed, security, and anonymity. It currently has over 1,300 servers (and counting) in over 75 countries. It is the best VPN for HBO.

It is one of the best options for streaming as all of its servers use the AES 256-bit encryption protocol, and no IP or DNS leaks are permitted. 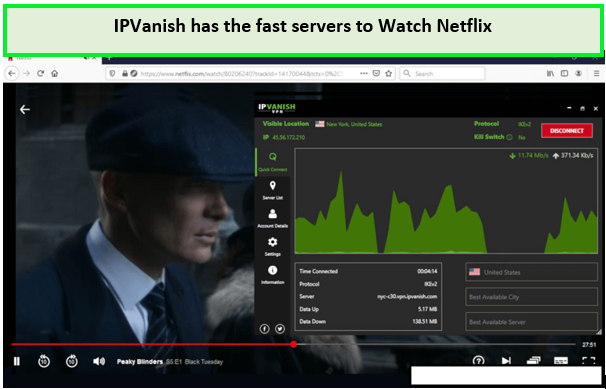 On a 100 Mbps connection, this VPN managed to offer a download speed of 75.12 Mbps and an upload speed of 39.48 Mbps. With this speed this is the best VPN for streaming video.

Why Choosing the Right VPN is Important for Streaming

Geo-blocks ensure that you are allowed to watch only that content which airs in your country. Needless to say, they annoy the hell out of streaming enthusiasts who are interested in a variety of content from all around the globe.

Thankfully, there is a workaround for this frustrating restriction: you can sign up for a premium VPN. Right VPN can unblock many streaming websites of your choice.

However, you must keep in mind that many popular streaming sites have begun to employ anti-VPN technology to identify connection attempts from outside of the regions they are restricted to.

This often means that when users connect to these platforms through a VPN, their IP address gets logged and checked against an internal list of known VPN services IPs. If the user’s real IP matches one on the list, they are blocked from access for a set amount of time before being able to log back in.

Therefore, you must remember that we only recommend a premium VPN over the free VPN services because a reliable VPN is able to successfully evade the identification mechanisms these streaming platforms employ.

A VPN can be used on any device like Android TV, Apple TV, Smart TV, Amazon Fire TV, and many others.

There are many great VPNs, but not all of them work for streaming movies.

CactusVPN will not unblock popular streaming services like Netflix unless you switch from the encrypted to a more insecure, non-encrypted service type. I attempted to use both with streaming Netflix US and found that to be a major issue with CactusVPN.

Hotspot Shield’s free VPN version is one of the best, but it’s not ideal if you want to stream movies. The 500 MB data cap only gave us about 30 minutes of streaming in HD each day for a month with no throttling. Thankfully, there are paid versions that offer more and don’t throttle you.

If your VPN cannot unblock a particular streaming service, we would advise contacting the VPN provider’s customer support to determine the cause. However, usually, these services can detect a VPN through anti VPN tools and will block your IP address.

Which VPN Is Good For Streaming?

There are numerous services available in the market that come with great options for users but we recommend the following 05 services as they have been extensively tested by our team.

Yes, Using a VPN is worth the effort because it will allow you to access content that has been blocked by streaming services like Netflix, Amazon Prime, or HBO Max. It also has other benefits such as offering anonymity, resolving any buffering problems from throttling, and encryption of your data.

Should I go for a free streaming VPN?

A free VPN provider is hardly going to meet your streaming needs if you are seeking better protection online. While saving a few bucks per month might be tempting, the risks of data and privacy loss outweigh those meager savings. So, don’t be pennywise pound foolish, and invest in a premium VPN.

Which VPN is best for streaming?

Watching a two-hour movie at 1080p quality would use about 7 or 8 Gbps. If you were to watch a movie at 720p, you could expect to download around 0.9GB per hour. 2K and 4K video files using about 3 GB and 7.2 GB an hour respectively; this doesn’t include other factors.

Is NordVPN good for streaming?

Yes, with the exception of a few small glitches with the applications, NordVPN is a superb streaming VPN that nearly always works dependably.

Does a VPN improve streaming?

VPNs can, under some circumstances, boost the speed of certain services. ISPs occasionally limit or artificially slow down certain types of data; for example, several large ISPs have throttled streaming entertainment services such as Netflix.

Only high-quality VPNs can bypass geo-restrictions and let you stream content from platforms such as Netflix US from any location. However, it can be difficult to choose the best VPN for streaming, but it won’t be with the help of the above guide.

Finally, you can stop worrying about finding the best streaming VPN and start enjoying your streaming experience!