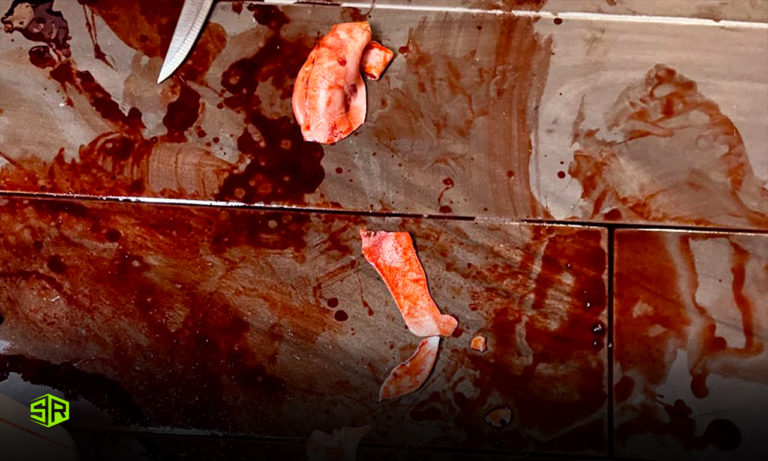 50 Cent’s latest horror movie is so close to reality that even a cameraman couldn’t sit through it all and watch it.

One of the crew members for the film passed out while filming a gory scene for the upcoming horror movie, “Skill House,” according to producer Ryan Kavanaugh and director-writer Josh Stolberg for the film.

TMZ Hip Hop obtained a video in which the camera’s focused on an actor dripping with blood. However, before you know it, the camera goes wobbly, followed by the cameraman falling to the ground.

The 51-year-old director-writer shared the incident on his Twitter along with images of blood-stained props on Sunday:

“Yikes!!! We shot a kill scene last night, and the camera operator became so nauseated that he passed out, and the camera crashed to the ground. Had to stop down for a 1/2 hour. He’s okay now but… get ready for some crazy s- -t!”

Yikes!!! We shot a kill scene last night and the camera operator became so nauseated that he passed out and the camera crashed to the ground. Had to stop down for a 1/2 hour. He’s okay now but… get ready for some crazy shit! pic.twitter.com/YJH2tlruTE

Rapper and actor 50 Cent retweeted Stolberg’s tweet and stated how the killing scene was “so real” the cameraman passed out. He also went on to say that this movie will change the rules of the horror genre:

Crazy night one of our camera men passed out cold for 30min from the scene. Couldn't take how real it was. We're elevating horror to the next level. This is gonna change the rules of the game. #skillhouse@bransoncognac @lecheminduroi https://t.co/z6KVVhFALk

Although the rapper-actor wasn’t on the set when the incident occurred, according to TMZ sources, other actors like Amira Mertaban and others were there. The cameraman was immediately provided medical care and attention and is reportedly fine. He may continue to work on set if he can stomach the gruesome scenes.

Catch Live Updates from the Director-Writer on Set

Josh Stolberg shared a picture of Leah Pipes holding up her split-open pants, which happened during the shoot last night:

So ⁦@leahmariepipes⁩ was acting so hard last night that she split her pants open. I screamed from the monitor “Keep going!!!, to which she replied “But my entire ass is showing.” pic.twitter.com/YeqwoqCApg

Here’s a look at a bloody slate during the shoot:

With the shoot halfway done, Josh Stolberg was over the moon and thanked his cast and crew immensely:

HALFWAY done shooting #SkillHouseMovie and seriously in hog heaven (well, if the slaughter house was heaven). I am constantly in awe of the dedication of my cast and crew for carrying me through this production. They are everything! So excited to share the movie with you!!!

According to Stolberg, the plot of the Wrap includes “a dark satire of social media and influencer culture, exploring how far people will go for online fame.” That’s why TikTok influencer and star Bryce Hall is also acting and producing the movie.

Apart from him, 50 Cent and UFC icon Paige VanZant are also serving as producers and actors.

This makes me happy. But killing all these beautiful people off… one by one… in HORRIBLE fucking ways… makes me even happier. https://t.co/6sFrcDgCdu

The release date of “Skill House” hasn’t been announced yet. In the meanwhile, you can watch American Horror Stories on Hulu, or to satisfy your thirst for gruesome scenes, have a look at the most disturbing deaths in horror movies.