Sam Elliot Renders Apology for His “Power of Dog” Comments 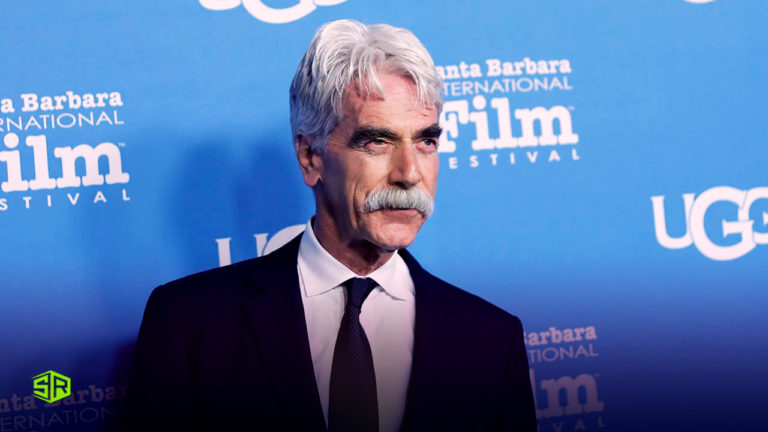 Sam Elliott rendered an apology on Sunday for the comments he made about the movie The Power of the Dog last month while appearing on the WTF podcast hosted by Marc Maron. He issued a statement apologizing to the cast and crew of the film by Jane Campion after he lambasted its gay themes.

The actor left a special message for Campion, who was awarded Oscar for directing the Western romantic drama featuring Benedict Cumberbatch.

“I told the WTF podcaster that I thought Jane Campion was a brilliant director, and I want to apologize to the cast of The Power of the Dog, brilliant actors all,” Elliott stated. “And in particular Benedict Cumberbatch. I can only say that I’m sorry and I am. I am.”

Twitterati’s were also quick to respond on the matter and some appreciated that the actor came forward and apologized. 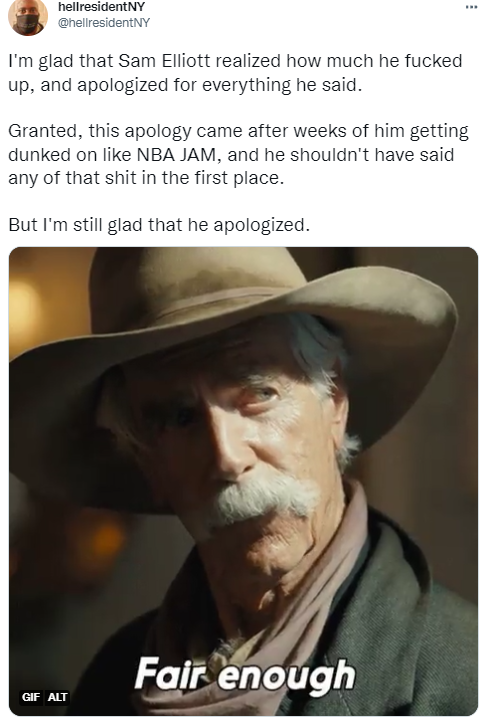 Actor Sam Elliott is now trying to walk back his incredibly homophobic rant about the movie "Power of the Dog." I hope the LGBTQ+ community makes it clear he can pound sand.

“Friends on every level and every job description up until today. I’m sorry I hurt any of those friends and someone that I loved. And anyone else by the words that I used.”

While talking on Sunday during the Contenders TV event by Deadline to espouse 1883 on Paramount+, Elliott started his confession with an informal warning. “First, don’t do a podcast with the call letters WTF.” Moving forward he added that the film “struck a chord with me” and wanted to discuss with Maron “how I felt about the film.”

“I wasn’t very articulate about it. I didn’t articulate it very well,” Elliott stated while appearing to talk publicly for the first time since the podcast of March 1, 2022. “And I said some things that hurt people and I feel terrible about that. The gay community has been incredible to me my entire career. And I mean my entire career, from before I got started in this town. Friends on every level and every job description up until today. I’m sorry I hurt any of those friends and someone that I loved. And anyone else by the words that I used.”

Faith Hill, Elliott’s co-star came up as and lauded Elliott’s “amazing character” on set and how he would try to mend the situation by making every effort to apologize to anyone he thought he had made upset. “Whatever it was, if he stepped on a toe or knocked off a hat.”

“We love Sam!,” she then exclaimed.

The 77-year old veteran actor faced severe backlash after he appeared with Marc Macron on the WTF podcast back in March and censured Power Of The Dog for having homosexual themes. “You want to talk about that piece of s—?” Elliott stated when questioned about the film, before juxtaposing the central cowboy role of Cumberbatch to a Chippendale dancer with “bowties and not much else.”.

“That’s what all these f—ing cowboys in that movie looked like. They’re all running around in chaps and no shirts, there’s all these allusions to homosexuality throughout the f—ing movie,” Elliott said, later asking about Campion’s experience to steer a western movie.

“She’s a brilliant director, I love her previous work, but what the f— does this woman from down there, New Zealand, know about the American West?” Elliott questioned. “And why the f— did she shoot this movie in New Zealand and call it Montana? That rubbed me the wrong way, pal.”

Later in the response to these comments made by Elliott, Campion, who last month scored two Best Picture nominations in Oscars history in recognition of Power of the Dog and became the first woman ever in her career to receive that, told Deadline “I think it’s really unfortunate and sad for him because he’s really hit the trifecta of misogyny and xenophobia and homophobia.” Later that month when she was asked about his remarks while on the red carpet of the Directors Guild of America Awards she responded by saying that he is “a little bit of a b-i-t-c-h”.

“He’s not a cowboy, he’s an actor,” Campion also said. “The West is a myth exposed. There’s a lot of room on the range. I think it’s a little bit sexist, because you think about the number of amazing westerns that were made in Spain by Sergio Leone. I consider myself a creator and I think he sees me a woman or something lesser first, and I don’t appreciate that.”

Early in March during a roundtable discussion at BAFTA‘s Film Sessions Cumberbatch as well appeared and responded to the homophobic remarks, though the actor avoided addressing Elliott by his name.

“I’m trying very hard not to say anything about a very odd reaction that happened the other day on a radio podcast, without meaning to stir over the ashes of that,” he said. “I won’t get into the details of it, if it’s hit in the news at home, it has here. But, someone really took offense … to the West being portrayed in this way.”

Cumberbatch continued further and added, “Beyond that reaction, the denial that anybody could have anything other than a heteronormative existence because of what they do for a living or where they’re born… there’s also a massive intolerance in the world at large towards homosexuality, still, towards an acceptance of the other, of any kind of difference, and no more so than in this prism of conformity, in the sense of what is expected of a man in the Western archetype mold of masculinity.

Cumberbatch added, in regard to Campion’s masterful decoding of masculine stereotypes via his conflicted cowboy, “These people still exist in our world … there’s aggression and anger and frustration and an inability to control or know who you are in that moment that causes damage to that person and as we know, damage to others around them. I think there’s no harm in looking at a character to try to get to the root cause of that.”

Elliott plays the role of Shea Brennan in the Western drama TV series 1883, an inured Civil War veteran who heads the Dutton Family and a group of European emigrants across the frontier. Paramount+ has planned to submit Elliott’s name for the Emmys in the category of Outstanding Actor, while 1883 will compete for the Limited Series award since the TV series will not come back for a second season.