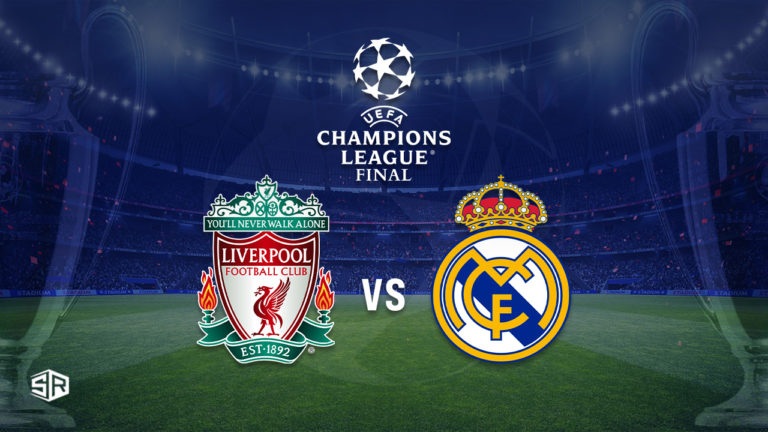 The stage will be set this Saturday, May 28, 2022, for one of the biggest nights of the footballing world, when Liverpool will go head to head with Real Madrid at Stade de France to claim the bragging rights of European champions. If you are a football freak and wondering how to watch UEFA Champions League 2022 final live outside USA, don’t skip this article.

The road to the Champions League Final isn’t just a fluke. It requires consistency, dedication, and sheer hard work on the pitch. Making it to the finals is a feat itself and both Jurgen Klopp and Carlo Ancelotti are masters of their trade, especially in European competitions.

Jurgen Klopp’s men missed out on the Premier League title after Manchester City edged out The Reds on a dramatic final matchday last weekend. However, they will be eagerly looking forward to grabbing another silverware this season after beating Villareal on a 5-2 aggregate score.

Ancelotti’s troops, on the other hand, were crowned the La Liga champions earlier this month, and given their rich history in the UEFA Champions League competition, they are definitely a force to be reckoned with, especially after their heroic comeback win against Manchester City with a 6-5 aggregate score.

The event will be broadcast and streamed live in the United States by Paramount Plus. Although the broadcast will be available in numerous places across the world, if you’re currently in a country where the live stream isn’t available, you’ll need to evade the streaming channel’s geo-restrictions.

With a VPN like ExpressVPN, you can watch Paramount Plus outside USA without facing any geo-restriction barriers. If you’re new to VPNs, this is an excellent guide for anyone who doesn’t want to miss their favorite players competing for one of the most prestigious trophies in Europe.

A premium VPN app is required for guaranteed access to the UEFA final coverage. Because there are so many VPN service providers on the internet, finding one that exactly meets your needs might be difficult. However, we recommend that you use only trusted VPN apps and avoid using free apps that may risk your unblocking and viewing experience.

After testing and retesting 20+ VPNs in terms of security, speed,  unblocking features, and server count, we have listed the best VPNs that can easily bypass the geo-restrictions and let you watch UEFA Champions League final 2022 live outside USA: 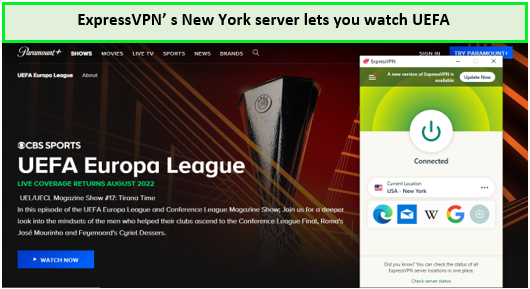 We got remarkable speed results from ExpressVPN on a 100 Mbps base connection.

This VPN offers a worldwide network of 3000+ servers in about 94+ countries and there are 25 server US locations. Our top pick is the New York server, as we enjoyed bufferless streaming.

It can unblock any geo-locked streaming site, according to our tests, including Prime Video, beIN Sports, Tennis Channel, Fubo TV, Sling TV, DirecTV, TSN, DAZN, TVA Sports, and many more.

Lightway Protocol, Split tunneling, Kill Switch, Best-in-class encryption, and many other characteristics make ExpressVPN stand out. You can use this VPN service to watch different sports events like NFL Draft and Tour de Romandie outside USA.

ExpressVPN is compatible with Windows, Android, Linux, macOS, iOS, streaming devices, smart TVs, routers, and gaming consoles and comes with a number of cutting-edge features. This app can be used on up to five devices simultaneously with a single account.

Surfshark is a budget-friendly VPN to watch UEFA Champions League final 2022 live outside USA as it costs only US$ 2.30/mo - 82% Off on 2 Years Plan and has a bunch of state-of-the-art features. 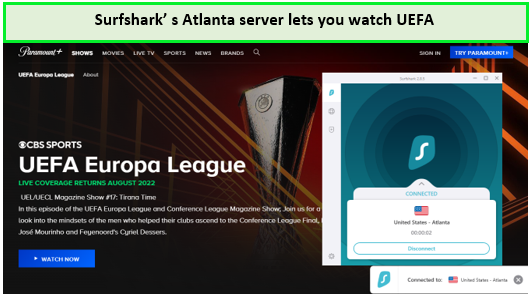 On a 100 Mbps connection, we had an average download speed of 88.14 Mbps and an upload speed of 83.72 Mbps when connected to their Atlanta server. According to the results, there won’t be any buffering while streaming using Surfshark.

It offers a wide network of 3200+ servers located in 65+ countries. With these servers, you can watch streaming platforms like CNBC and Oxygen TV outside USA.

NordVPN has the largest server network to watch UEFA Champions League final 2022 live outside USA. It has 5543+ servers operating in 94+ countries. Moreover, it offers 1900+ servers in the USA. You can easily get past the geo-blocks of ABC, ESPN+,  and Sling TV, allowing you to watch Motorcycle Grand Prix and Premier League matches from anywhere. 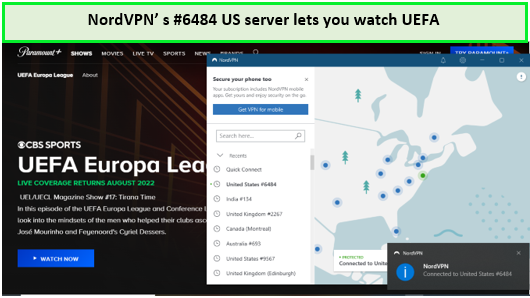 NordVPN attained download speeds of 85.48 Mbps and upload speeds of 48.42 Mbps when testing on its New York server. Given our 100 Mbps home connection, these results are excellent.

NordVPN offers great speed for streaming in 4K without interruptions.

When and Where is the 2022 Champions League Final?

The 2022 UEFA Champions League final will be held in Paris on May 28. The game was originally scheduled to be held in Saint Petersburg, but after Russia’s invasion of Ukraine in late February, UEFA stripped the Russian city of its hosting rights, and the match will now be held at the Stade de France in Paris.

Where can I Watch Liverpool vs. Real Madrid with a VPN?

The UEFA Champions League is an annual club football competition organized by the Union of European Football Associations and contested by top-tier European clubs. The competition is decided by a round-robin group stage, which qualifies teams for a double-leg knockout format and a single-leg final.

Only one UEFA Champions League semifinal second leg remains: Real Madrid or Manchester City will go to the final on May 28 in France, where they will face Liverpool.

Other reliable sources for UEFA final coverage this year include DAZN in Canada, BT Sports in the United Kingdom, and Stan Sports in Australia. If you are not currently located in the United States, you can watch the event live on the specified channels in these countries.

If you have a Paramount subscription and are determined to view it on your favorite sports channel, you may use ExpressVPN to bypass the streaming platform’s geo-restrictions.

Other channels on which you can watch the Champions League final are following:

Where can I watch the Champions League final?

Who has won the 2021 UEFA Champions League?

Chelsea won the 2021 UEFA Champions League final with a 1-0 victory over Manchester City in the Premier League.

Stade de France is all set to host the biggest event of the year.  All soccer fans around the world are looking forward to watching this tournament.