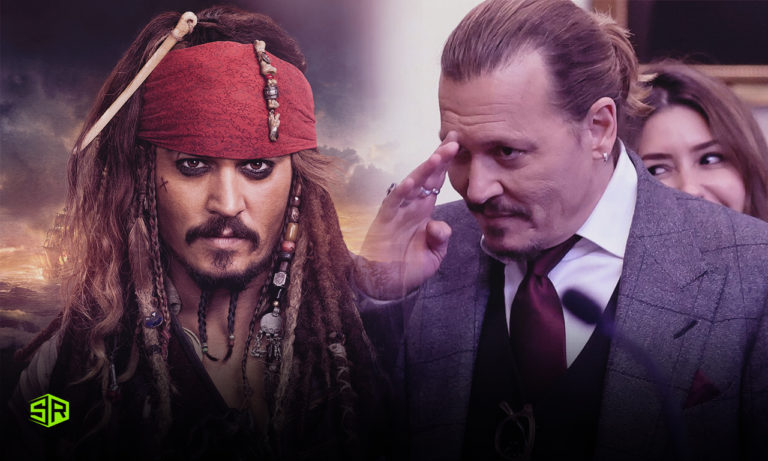 On Wednesday, throngs of cheering fans awaited Johnny Depp outside the Virginia courthouse as he appeared for the $100 million defamation case against ex-wife Amber Heard. He surprised the fans by stopping and having a chat with them while also showing a glimpse of his cheeky Captain Jack Sparrow side.

A video went viral where Johnny Depp can be seen interacting with his fans. Depp was in his car and waving at the fans who had gathered outside the Fairfax County court. A die-hard Depp fan shouted at him, saying,

Depp waved to the fan and channeled his inner Jack Sparrow to respond to them. He can be heard using his Jack Sparrow voice. The video is currently doing rounds on Twitter and has garnered 6859 retweets, 36.7k likes, and 589 quote tweets, and the numbers continue to rise. Check it out right below:

a fan tells johnny depp he will always be captain jack sparrow and he responds with jack's voice 😭 pic.twitter.com/a8vnzDl4oS

The comment section exploded with netizens saying that even though he has been replaced by Margot Robbie in the spin-off, Pirates of the Caribbean will never be the same for the fans since Depp no longer will be a part of it.

Meanwhile, amidst the ongoing tension, the Pirates of the Caribbean producers stated they don’t have any intentions of bringing back Johnny Depp anytime soon.

Since the actor lost the libel trial against The Sun, which labeled him as a ‘wife-beater’, things didn’t go well for him. He was unjustly let go from two major movie roles; Fantastic Beasts 3, despite shooting for a day, and even Pirates of the Caribbean 6. Margot Robbie may have replaced him; however, fans still hold a grudge as Depp’s portrayal of Sparrow was a beloved one.

The actor debuted in 1984, and since then, he has been a major part of many hit movies. However, he wasn’t recognized for his works until the 2000s and received due credits on Pirates of the Caribbean. From then on, he was named one of the “most commercially successful movie stars.” Before MCU rose to the fame that it achieved in this day, Jack Sparrow was the superhero people looked up to.

Fans were absolutely outraged when Johnny Depp was ousted by Disney from its Pirates of the Caribbean franchise. They have launched multiple petitions and even demanded that the studio be boycotted. A similar verdict is being demanded for Amber Heard, who’s still a part of Aquaman 2, as the trial is in progress.

The petition for kicking her off the project has reached over 4 million signatures.

On Thursday, the 19th day of the defamation trial against Heard, Depp arrived at court in his SUV, which was blaring reggae music. He was greeted with applause by a throng of fans waiting for him outside the court. The actor wore a grey suit while holding onto his two doodle notepads.

Depp told the reporters jokingly that the fans were cheering for him because “I just made breakfast for all of them this morning. Waffles,” as he walked inside the court and waved at the loud fans.

Whilst entering the court building, Depp was seen graciously meeting the police officers at the door with a good morning and shaking hands with them.

Previously, the 58-year-old actor has joked to reporters and photographers that he has a “lot of relatives” while referring to the dozens of fans who religiously awaited his arrival outside the court for weeks.

One fan who had been waiting outside the court for Depp said a reporter had asked them whether they had, in fact, received waffles from the actor, but they said it had been a ‘cute joke.’

Johnny Depp made waffles for his fans this morning.
"I just made breakfast for all of them this morning….waffles"#johnnydepp #depptrial @7NewsDC pic.twitter.com/BUQ8Jj9gCW

Despite being on trial after being accused of domestic violence, Depp has been receiving quite the fanfare. The actor has also strongly denied the allegation.

Depp is countersuing her in Fairfax County Court for writing an op-ed in The Washington Post in 2018, where she described herself as “a public figure representing domestic abuse.” According to Depp’s lawyers, he was defamed in the article by insinuating that Depp was the perpetrator.

The outcome of this defamation trial remains to be seen. Specifically, when Amber Heard has been diagnosed with two personality disorders and continues to find herself on the wrong side while being cross-questioned by Depp’s lawyers.

We believe Depp deserves to be absolved of the accusations against him. Heard should pay severely for using Depp’s fame for her own gain and also discrediting the “Me Too” movement by her allegations.